Eight young people and a youth-run community group were recognised for their contributions to the community at the second NOVO Youth Awards on Friday night.

Highlighting the strength, compassion and dedication of local youth within the Swan Hill region, awards were presented for the following:

Swan Hill Rural City Council Mayor Les McPhee was there to present the awards on the night and said he felt a real sense of pride for the youth of this community.

“This year, Novo Youth Council received nominations involving 85 different young people – that’s 85 young people succeeding at school, in sport, the arts and in our community, and some of them overcoming huge obstacles along the way,” Cr McPhee said.

“Volunteering and caring for those with a disability or illness, overcoming barriers, campaigning for the environment, mentoring and incredible leadership – this is just a snapshot of what was contained in those nominations.

“Not to mention, the awards night itself was organised and run by Novo Youth Council members and they did a terrific job.”

Each winner was presented with a certificate and a $100 cash prize.

Further information on winners below.

Young Achiever – Bayden Clayton
Bayden strives to be a positive role model for young Indigenous people in Swan Hill. Completing his high school education through the SuniTAFE Murruk Marruk project, Bayden then participated in the creative leadership program through Regional Arts Victoria after which he was awarded a regional scholarship through Melbourne Theatre Group.

Currently working in Customer Service at MDAS, he has recently been accepted to study a Bachelor of Arts at Deakin University.

Young Leader – Bonnie Kelly
Bonnie (peer appointed ‘local legend’) was the Swan Hill College Junior School Captain in 2016, has taken part in the Alpine Leadership Program in China in 2016, volunteers her time to help with many local performing art projects, was the face of the headspace ‘Virtual Tour’ video and is very active in the music community performing at many local events.

Young Neighbour – Brodi Purtil
Brodi has been an active member of the NOVO Youth Council for the last two years and is heavily involved in Mallee Cars Cruze for Awareness.

She also volunteers throughout the community in performing arts and sport, directing youth theatre performances and umpiring futsal.

You can often find Brodi being helpful behind the counter of the Swan Hill Post Office as part of her School Based Apprenticeship.

Young Performer – Tiana Sixsmith
Tiana has danced for a number of years with Richardson Dance Studio and has also worked on multiple productions as a choreographer for Swan Hill Theatre Group’s youth performances.

Tiana was awarded a Muso’s stuff scholarship to gain access to music industry. This scholarship saw Tiana placed in the all girl band Hellicity, where she successfully gigged across the Swan Hill region. She is now playing in two bands– Twenty18 and Lunatic Soup.

Tiana is passionate about beating gender stereotypes in the music industry and also aims to start a local not-for-profit music program for young people who can’t afford music tuition.

Young Scholar – James Schifferle
James was selected to attend the NCSS program at Sydney University in the summer holidays before beginning year 12 in 2016.

While studying a full load of year 12 subjects, James also completed a school-based apprenticeship in his final year of schooling.

He was awarded the title of Victorian School Based Apprentice of the Year in 2016. James was dux of Swan Hill College last year with an ATAR score of 91.2.

Young Scholar – Lachlan Carroll
Lachlan was an outstanding student in terms of personal application to his studies. He set a high standard for himself and achieved excellent VCE results with an ATAR of 97.00 in 2016. Not only did he work to achieve his desired results, he did so in a way that very visibly demonstrated commitment and discipline.

He was an excellent role model for his peers and for younger students. Lachlan is aiming to study medicine in 2018.

Young Sportsperson – Claire Barr (nominated three times for the award!)
Claire is a multiclass swimmer who attends the Swan Hill Specialist School. In the past year she has made significant effort to improve her swimming, training at least six days per week and sometimes twice a day.

She has won countless awards and accolades, competed against current paralympians and is currently aiming to compete in the 2018 Commonwealth Games.

On top of her swimming, Claire is also a keen competitor in Athletics and Cross Country. Claire’s attitude in life is to aim high and don’t let disability hold you back!

Young Visual Artist – Ryan Bruton
Ryan is a local filmmaker and the owner of successful YouTube channel: Hyperax Films, where he has posted over 50 comedic videos. He uses many sophisticated editing techniques, special effects and has experimented with different genres and styles.

In the past year, they have planned and run school socials and formals, as well as fundraising for local causes (donating all proceeds to the Cancer Council) and volunteering their time at the Robinvale Colour Dash.

In addition to these fundraising efforts, this year they plan to run more social events for Robinvale College students including junior social, senior formal and community events such as community garden working bees and movies nights.

The Robinvale SRC’s mission is to inspire other young people to make a difference in their community.

This post has been syndicated from the Swan Hill Rural City Council website and was correct at the time of posting. Read the original post here: NOVO Youth Award winners 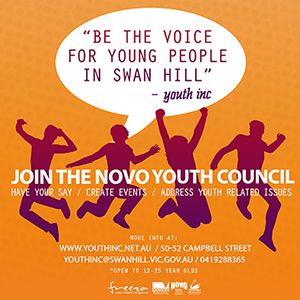